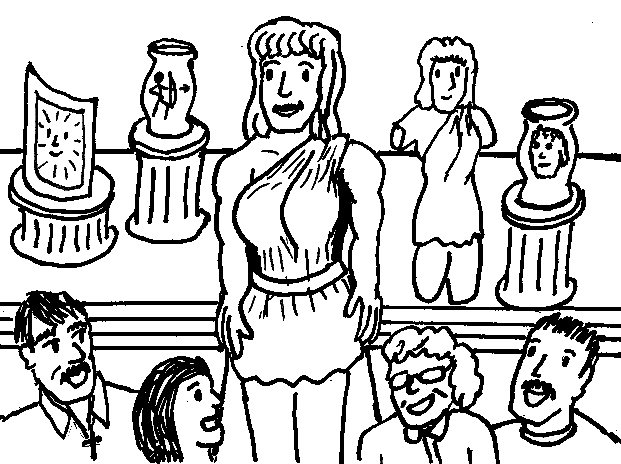 A statue sculpted by Pygmalion and brought to life by his love and the will of the gods in the days of mythological Greece.

She was known to have befriended Aphrodite Bilistiche in 264 BC. Over the centuries she has had many adventures and clashed with a number of enemies, including the Earl of Oxford. In the 1940s she fought to protecting Greek art and culture from the Axis invaders and took part in the battle against Manga Man Gold. At some later point, she had a relationship with Gold, and they had a magically created daughter, Manga Girl.

Currently, she is the CEO of Milky Way Technologies, the company that constructs the Earth's Space Elevators. She is a shadowy but benevolent presence in the world of net.heroes, mentoring her daughter and partaking in cosmic/mystical adventures which are too weird even for the LNH.

She keeps a trophy room with mementos of her many adventures, in the skyscraper where Milky Way Technologies is headquartered.

Sly, mysterious, always smiling. She is often content to stand still, and can easily be mistaken for a statue.

Galatea is immortal, at least so far. Due to the blessing of the gods and/or her own mystic experience, she controls formidable magic, including the ability to cast lightning bolts. She can make her body as soft as human flesh, or as hard and invulnerable as marble.

In her natural form, Galatea is an ivory sculpture of an impossibly beautiful woman.