Skunk Girl's origin is not known for sure. One story suggests that she was genetically altered and memory-implanted by Manga Man to think that she was Panta's cousin; however, this may or may not be canon. Who knows.

She joined the LNH at the same time as a group of other heroes. Unfortunately, one of those other heroes, the Living Monotone, was assassinated, and in the aftermath, she and several others were locked up in the brig. Breaking out to clear their names, they became the a.outSiders.

After said names were cleared, she joined the LNH full-time. Pitched in when the LNH fought zombie presidents. Currently, she's a member of The Core LNH.

Aggressive and snarky. Kind to her friends. Enjoys being girly, but dislikes being seen as weak. 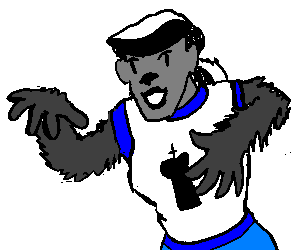 The Earth-SW12 version of Skunk Girl, as seen in Power School 2013.

Proportionate strength and agility of a skunk. Retractable claws and enhanced senses. The "Skunk Blast", a burst of powerful stench from her tail.

Usually wears some form of body armor. Trained as a black ops specialist.

Her alternate-universe counterparts include the mysterious Agent Mephitidae and the teenage Skunk Girl of Earth-SW12.

Went on a date Obnoxious Ame.rec.a Boy, which went badly (there were zombies involved). Decided afterwards that she mainly wanted to work on herself but would be open to a relationship.