She defeated the Ultimate Ninja duplicate created by Master Cliche in a battle to the death.

<a lot more events for when I re-read Tales>

A catlike body and abilities, much the same as characters like Tigra, Feral and Pantha. Has the ability to go into a BERSERKER RAGE™ (see below). Has been known to use a sword at times.

Panta is one of the cutest people around. She's almost always considerate and attentive, sweet, kind and trying to help.

...that is, until she is pushed one step too far. Until she is pushed into a BERSERKER RAGE™. Then she fights in the most disgusting, bloody, violent manner possible. She does not merely punch villains, she shreds them. Behind her, she leaves torsos, body parts, ripped-out throats and rolling heads. However, she cannot sustain the BERSERKER RAGE™ more than a moment, and afterwards, is as weak as a kitten.

Intelligent, but naive, Panta must sometimes have things explained to her. She enjoys swimming, active sports, and cat toys.

For the LNH, she represented: 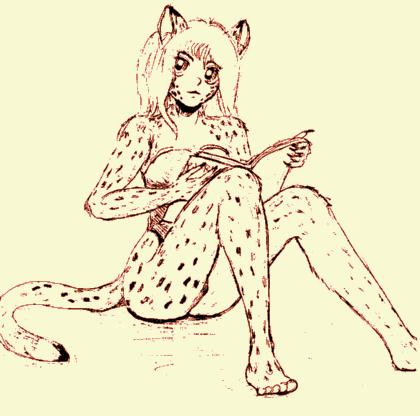 A slender catgirl, Panta has the yellow-orange fur of a leopard with black rosetted spots. Her fur shades to cream around her lower face, down her neck, and across her chest and stomach. She has a leopard's tail with a black tip. Her snub nose is tipped with a little noseleather (like a cat's, naturally). No whiskers, but pale green cat eyes. Her cat ears are at the sides of her head, partially covered by a shock of blonde hair light enough to almost be white. She usually wears a skin-tight body suit, cut low across her chest and high over her thighs.

She was close friends with the rest of the Net.Patrol until one by one they left the LNH.

She had a long-time crush on Pocket Man, which only ended when he announced his marriage to Organic Lass. She danced with Kid G at the Valentine's Ball, and they remained close after.

Manga Man desired her since she arrived at the LNHQ, and served as a recurring antagonist for years. Self-Righteous Preacher despised her.