Joined the LNH just after Kid Enthusiastic and was almost immediately shanghaied into his plot. Together with others they met during a quest to free an alternate universe from evil magic, they formed the LNH Subgroup Without A Name.

Telepathy and precognition (limited to short glances). They're mutant-origin, and powers have shown up elsewhere in his family tree.

Is allergic to dimensional travel. 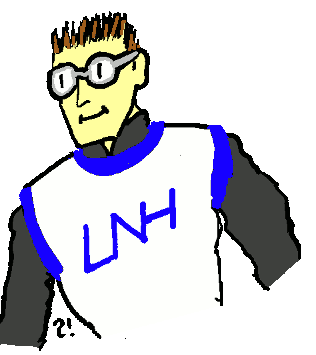 The Power School 2013 version of Casey, by Scott Eiler

He has an unnamed father, mother and grandfather. His grandfather has telekinetic powers and was a net.hero in the 1950s, but the Vaguely McCarthyist Administration forced him into retirement.

Adelwine Aaronson is a close friend. Faded Iron Master is a version of him from an alternate timeline. He seems to have a vague mutual attraction to Mala, made more awkward by the fact that she was raised by the FIM.