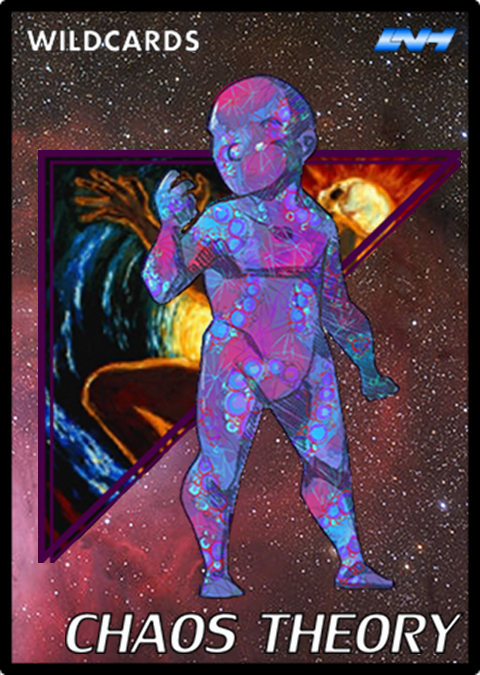 The early history of the cosmic being known as Chaos Theory is unrevealed, and may be indeterminate on a quantum level. It is known that they have a habit of changing the past, and claim that their activities make the timeline paradoxically stronger and more able to survive change.

At some point, they began a tempestuous relationship with Masterplan Lad; at some later point (at least in MPL's timeline), they were captured in the Transfinite Black Hole by the Agents of the Inter.Net for time crimes.

Their timeline first intersected with the written page during Flame Wars Final, when they traveled back with the Agents before the emergence of the Serious Business. Since then, they've been hanging around in both Looniverse-A and Looniverse-20, bothering Masterplan Lad and dating Writer's Block Person.

When the Looniverse was in danger of becoming less Dramatic than Real Life, they manipulated the timeline to increase its Drama; but when Kid Occultism Kid convinced them that Comedy had to be an equal partner in this, they and VAMMO Woman re-adjusted the timeline to send the excess negativity into Earth-Combover. However, when Drama began flowing from Earth-Combover back to the Looniverse, threatening to replace it, Chaos Theory met with Masterplan Lad. Together, they observed the timeline as it rushed towards a great conflict, and prepared themselves for their roles in it. And though Masterplan Lad left to confront his own tragedies, together they fought against Simplicity, and got the world moving forward again.

Chaos Theory is a trickster figure with a cosmic outlook but a relatively human personality. They're mischievous, but ultimately a force for good. They like to tease and play tricks on those they are close to, but also give them lots of emotional encouragement and support.

They don't hew to any human identity category, and generally use they/them pronouns.

Chaos Theory is a cosmic being, and has high-level abilities to manipulate space, time, and probability. They're not at the level of anthropomorphic personifications like sig.ma or Unixepoch, but they can travel through time and between universes at will, move people and objects slightly out of step with the timeline, observe forking continuities, etc. They have no fixed shape and are probably composed of some sort of weird cosmic energy.

A usually-humanoid figure, formed out of spiraling, ever-moving fractals in red and blue and purple.

Chaos Theory has had a complicated and mischievous relationship with Masterplan Lad, which has gradually gotten more intimate over time. They have a more straightforwardly "no labels" relationship with Writer's Block Person – they date, cuddle, and do other things which are none of your business (unless you ask nicely).