The Syrup of the Gods 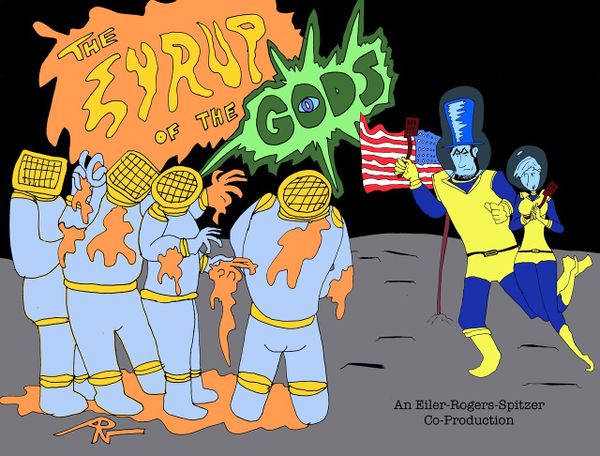 Art by Arthur Spitzer, from the Ripping Off King Arthur tumblr. 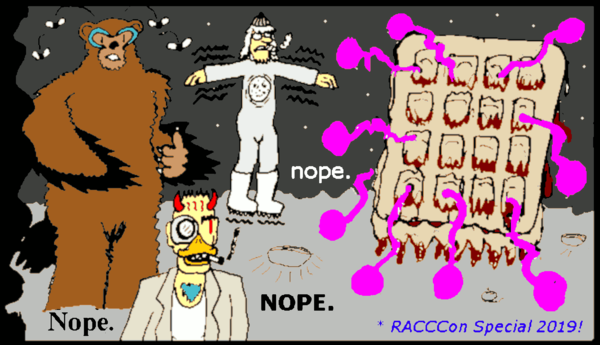 Art by Scott Eiler, from the Powernaut tumblr.

The Syrup of the Gods is a one-shot story by the attendees of RACCCon 2019 (Arthur Spitzer, Rob Rogers and Scott Eiler). It features the worlds of the Classic LNH, the Superhuman World, and Ripping Off King Arthur joining together in a rich, mapley eschaton!

There is a being who tried to remake the world, long ago. It was sealed away at the edge of reality... but what if something from the reality next door reached out, with a hand made of... syrup?

Constance Grenadine Queen, the most powerful woman in the world, and Mynadoombear, her chaotic cyborg companion, feel a malaise, an emptiness at the heart of the narrative in which they live their lives. Easily-Powernaughted Lincoln and his sidekick, Tanza Lopez, seek to preserve this world, but is that really such a good idea? Traci Cynical and Can't Ax Fight At The Lights, Man don't think so! Ducktor Psychobeat doesn't care, but that doesn't matter, as the Moon-Naut and Traci Racer discover the secrets of the moon – and the universe!

This should be the chaos of which life is made— but to heroes, villains, civilians and monsters, something feels just a bit too...

The Syrup of the Gods can be read here.

Its Ripping Off King Arthur crossover can be read here.

Its Superhuman World crossover can be read here.