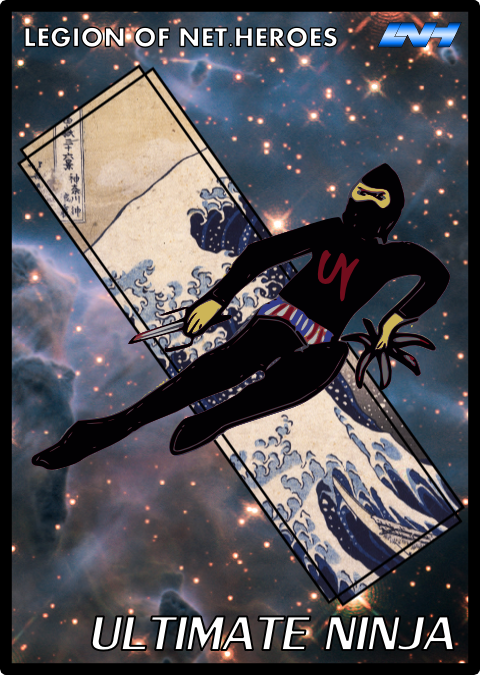 The Ultimate Ninja first appeared in the fall of 1992 as a mysterious wildcard, with a grudge against the LNHer Spelling Boy. Spending part of his time under the identity of Bandwagon Boy, he did not truly join the Legion until Cry.Sig, helping take down the enormously powerful Crossover Queen.

Not long after joining, he was thrust into a position of power, as part of a leadership triumvirate that consisted of himself, Rebel Yell, and Continuity Champ. But Continuity Champ appeared to go out in a Blaze of Glory, and Rebel Yell left the Legion due to A Lurk of Faith, leaving the Ninja as sole leader.

He would, over time, institute many of the policies that became part of the standard operating procedure for the LNH, including fighting a duel with him in the Peril Room as part of the initiation procedure for new applicants. No one actually won the duel, as Ultimate Ninja was Just That Good; it stood as a sort of Kobayashi Maru, an impossible test to determine the applicant's skills under pressure.

At some point in late 1993, Ultimate Ninja was replaced by an evil version of himself. He was held prisoner in an alternate dimension ruled by Master Cliche for more than a year, where he lost his memory for a time and took the name Slarg[1], but with the help of a mysterious ninja master, eventually managed to escape and defeat the evil overlord, while Panta destroyed his dark doppleganger. Time in the other world moved at a faster rate, and he spent 700 years there, guiding it to become an utopia before returning to the Looniearth.

Afterwards, he dropped the Bandwagon Boy identity and resumed his duties his leader. He acted primarily in that role for a good long while, becoming a character that writers would use to bounce their characters off of. He also had any number of offscreen adventures, such as when he helped Ultimate Nina's parents escape the League of Net.Assassins.

In 2006, a bunch of really weird stuff happened to UN. His hand was chopped off by Vel, and a mysterious stasis field kept it from being healed by the Legion's comic-book technology. Trying to use a mysterious space crystal to fix it, he was split into three different versions of himself. Two of those versions died during the Killfile Wars. It was all very confusing (and may or may not have even happened anymore).

He took a month-long vacation during April of 2007 – which turned out to be Infinite April, lasting 465 days. When he came back, he was charged with murdering the villain wReamicus Maximus. In order to focus his attention on his legal difficulties, he resigned as leader and put in charge a triumvirate made up of Catalyst Lass, Irony Man, and Fearless Leader. During the legal goings-on, he was kidnapped by the HexFire Club and replaced with wReamicus Maximus in an Ultimate Ninja clone body. He was kept in a hallucinatory dreamworld in one of Hex Luthor's secret prisons, but managed to break free and escape. Disguised as McLaughlin Man, he defeated the fake Ultimate Ninja. After Hex was taken down, he reclaimed leadership of the LNH.

After the Ultimate Ninja lead the LNH thru the rift crisis, the impossible happened – an applicant for the LNH, Merissa, bested him in single combat. Nothing changed; the Ninja was still the leader, still the compleat badass. Everything changed; the combat tests ended, in favor of the Membership Application Wheel, and tensions grew between UN and Merissa. It felt like things were climbing towards a great climactic battle...

...until the approach of the intolerable planet Neme.sys just before the 2016 election. UN lead a team of LNHers to the dystopian surface of the planet and freed the RACCtre. But the chaos and destruction the planet was causing was a reflection of great and terrible things in the Real World, and to truly resolve the narrative tension, someone would have to go to the Real World to fight it, by transcending the fictional reality of the Looniverse and entering the collective imagination. The Ultimate Ninja chose to go, entering the Cosmic Bus and disappearing, swearing he would return someday.

Was this a good idea? Was the Ultimate Ninja a worthy idea to spread into the world, one that would help – or a destructive ideal that would make things worse? It depends on who you ask. What is known is that the mantle passed on, to Ultimate Ninja II, and the Legion continued...

During some of the Ultimate Ninja's flashbacks, he went by the name of Lenny. Just another part of his mysteries...

Variable, due to the fact that almost all of the Writers wrote him at one point or another. Some thought of him as a straightforward if irascible hero; others as an almost-feral antihero; others as a nearly fascist authoritarian; and yet others as a pure comedic straightman.

Some things abided, however. The Ultimate Ninja was short-tempered, yet good at keeping his anger almost under wraps; he was an excellent fighter, a grudging yet talented administrator, and a strong leader, keeping this insane organization together and generally pointed in one direction.

After spending time in the alternate universe, he was supposed to be more mature and emotionally expressive, but this didn't take. A clone created by Barkseid claimed that this was because the New Dogs had used their power over the Source Code (or something) to retcon his history.

"Wait a minute...How did you survive being riddled with thousands of bullets in the first place?!"
"I shifted my vital organs out of the path of the bullets," Ultimate Ninja answered nonchalantly.
"That's impossible!"
"Am I not ninja?" 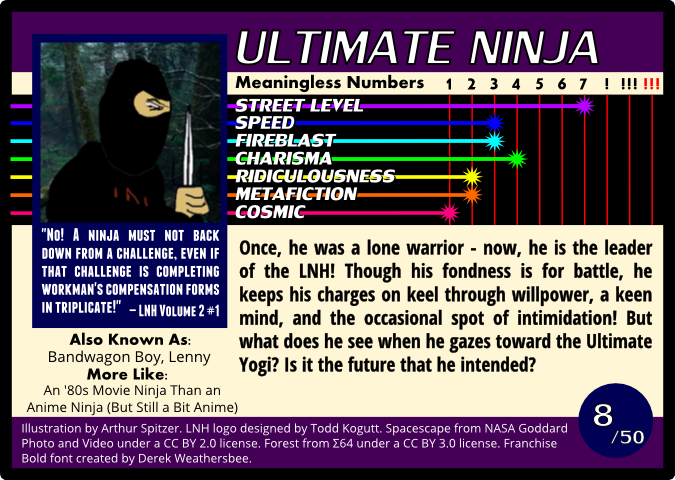 The Ultimate Ninja was the ultimate fighting machine. He knew every single way to kill, hurt, or incapacitate a person, and was constantly inventing new ways in his head. He trained every day in the Peril Room, where he often battled a holographic version of the entire roster of the LNH, whom he usually dispatched in mere seconds.

He could do just about anything a ninja or martial arts master in popular culture can do, sometimes even including telepathic contact through meditation.

He was also an ordained minister in the church of Count Dante.

Though the Ultimate Ninja was an expert in all sorts of weapons and can even use an eyelash to slay his opponents, his favorites were the Ninja Bush and the Ginsu Katana.

Tall and impossibly thin. Was usually garbed in a jet-black ninja outfit with a red, white, and blue belt.

He had a niece, Ultimate Nina, who he has trained in the ways of the ninja. He also trained Cheesecake-Eater Lad. Ultimate Mercenary tried to be his protege/sidekick, with little success.

John and Sally were his personal assistants.

In the 2001 Accies, Ultimate Ninja won Favorite LNHer, and in the 2005 RACCies, he was awarded Favorite Hero/Protagonist.

A ton, including but not limited to: